To qualify as a supercentenarian, a person has to reach the age of 110. But because so few men reach this advanced age, their cut off is typically taken to be 107. Some 85% of centenarians are women and 15% are men. Among supercentenarians, however, the female prevalence may be as high as 90%.

A study has found that despite humans living longer each year,the maximum age is fixed. Studies have found that there is a limit beyond which humans just cannot pass naturally.

Researchers led by Jan Vijg of the Albert Einstein College of Medicine in the Bronx, New York investigated whether it was possible for humans to live longer than 122 years which was the age a Frenchwoman Jeanne Calmet died in 1997 .

A convincing argument that humans could live longer and longer is the fact that over the last century humans have increased their life expectancy in most countries around the world.

If there was no limit we would see an increasing aging population. To test the theory, they studied the International Database on Longevity, which records the age of death from people in 41 countries between 1968 and 2006. They found that people do keep living longer, but this is only up to a certain point.

Their conclusion was that the natural limit to human life is no more than 125 years.

Jeanne Calment pictured below died at the age of 122 years. She is the oldest person to have lived. She lived to the ripe old age of 122 years and 164 days when she passed on. 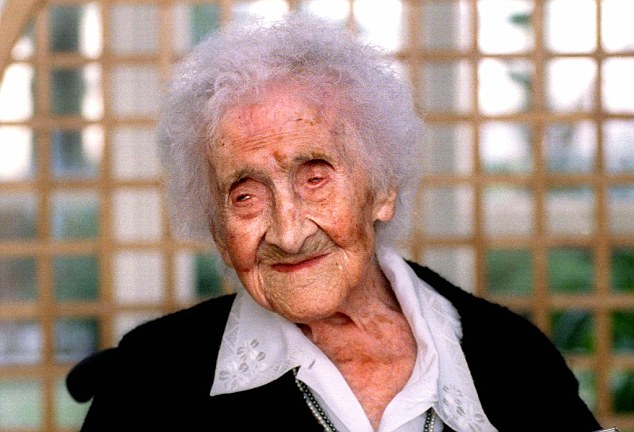 Her husband died at at 73. Jeanne smoked two cigarettes a day until 5 years before she died. She rode a bicycle until she was 100. She recalls in 1877 she sold pencils to Vincent Van Gogh.

They concluded that  ‘improvements in survival with age tend to decline after age 100,’ and that the age at death of the world’s oldest person has not increased since the 1990s.

Their findings were also supported by maximum recorded age of death figures in another database, that of the Gerontological Research Group, which records deaths from 1972 to 2015.

This database shows that each year, the maximum recorded age of death for the countries in the database ‘plateaued’ in 1994 at an average of 114, It has slightly decreased since then.

They estimate 125 as an upper limit: but stress it would be rare.

They estimate the chance of anyone living longer than Jeanne Calment, and recording a maximum age of 125 for any given year would be once in 10,000 years.

The UK, France, Japan and the US have the most supercentenarians – people aged 110 years or more.

Average life expectancy is 81.50 years in the UK.

There have been 134 verified supercentenarians from the United Kingdom.

The oldest living person in the United Kingdom is Bessie Camm from Rotherham, born 20 June 1904, aged 112 years, 107 days as of today.

Japan is the country with the world’s oldest population.